For high, wide or bulky hand-loaded items, Penco Wide Span is the industry standard for shelving designed to contain these types of items. Wide Span shelving bridges the gap between conventional shelving and pallet racks.

Whether you need a single unit, or a sophisticated multi-level picking system, Penco Wide Span can be is quickly assembled. There are minimum parts that snap or fit into place quickly and easily, with no bracing to add and no hardware required. 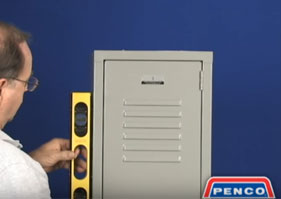 Growth Dimension Considerations
When planning a row of Wide Span Shelving, allow for the 1-3/4” width of each upright post and 1/4” additional per bay for the thickness of the beam ends. The Wide Span Growth Chart on the following page shows typical growth for two 96” steel shelf units and 96-1/2” plywood beam units. 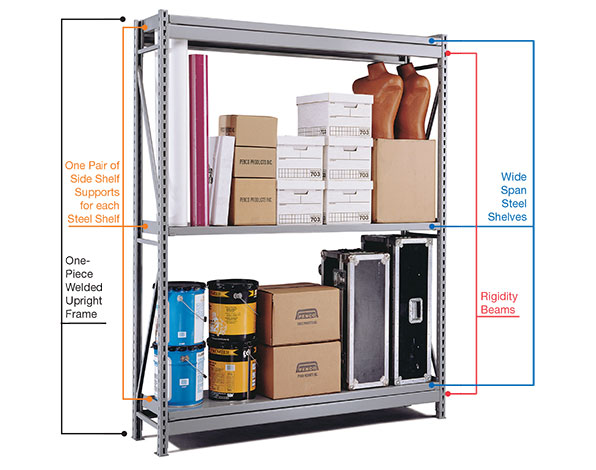 COMPONENTS Upright Frames: Penco Wide Span Upright Frames are made from heavy gauge steel, MIG welded into one rigid assembly containing posts, diagonal and horizontal braces and foot plates. There is no assembly required. Many sizes are available. Posts are punched on the face to provide positive independent beam placement on 2” vertical centers. The posts are marked on 12” centers to facilitate placement of shelf levels. A slot on each side of the post accepts a nib on the end of each beam, to lock it in place. Frames have a capacity of 7,500 pounds with a 1.92 safety factor where vertical beam spacing does not exceed 60”.

Rigidity Beams: Rigidity beams provide lateral stability for the shelving; a minimum of two pairs of beams is required per unit. They are constructed of 3” high steel channels with return flanges and a beam end connector welded to each end. Beams are supplied in even foot lengths from 4’ through 8’. Clearance between upright frames is 1/4” more than stated beam size. If the beams are being used as load bearing members, then Beam Braces are required. All Wide Span Beams have a patented Beam Lock that secures the beam end to the upright post to retard accidental beam dislodging. An embossed nib on the beam end engages a slot on the side on the upright post, which holds the beam end tight against the post (U. S. Patent No. 4,928,834). Can be disengaged with a mallet. It is normally not necessary to place rigidity beams beneath each steel shelf.

Steel Shelves: Penco Steel Wide Span Shelves are the ultimate in providing a smooth, safe surface for storing a wide variety of items. They are 1-3/4” high and feature double flanges at front and rear edges with a full width reinforcing pan welded to the center of the bottom. Each shelf requires a pair of Side Shelf Supports, which must be ordered separately. For 36”, 42” and 48” depths, the appropriate number of 18” and 24” deep shelves are provided, and are installed together on the Side Shelf Supports to achieve the stated depth.

Side Shelf Supports: Heavy gauge steel angles which support steel shelves. Each support engages the upright frame at four points. One or more tangs stamped into the surface engages the reinforcing pan on the shelf bottom to prevent accidental dislodging of the shelf. One pair is required for each steel shelf.

PLYWOOD USED IN LIEU OF STEEL SHELVES: Special beams and supports are used when plywood, pressed wood, particle board, oriented strand board or other composition type panels are used in place of steel shelves (these deck materials must be purchased separately). Two beam types are available: Standard Plywood Beams, and Heavy Duty Plywood Beams. Each is manufactured an extra 1/2” long to facilitate placement of full foot lengths of decking. Each uses a different type of front to back support for the decking material. Neither can be used in the same unit or bay with standard rigidity beams, because the lengths are different.

Standard Plywood Beams: Designed to support 1/2” thick deck material flush with top of beam flange when used with the appropriate number of Plywood Support Angles (ordered separately) which insert into slots in beam step. Overall height is 3-1/2”. Beam step is 1-1/2” deep by 5/8” high. A 48” deep deck will fit between beams without trimming when a 48” deep upright frame is used.

Beam Brace/Heavy Duty Plywood Support: This item fits easily into the inside of the beam opening and has two functions: A) When Rigidity Beams are used as load bearing members, the Beam Braces are used to keep the beams from twisting; B) When used with Heavy Duty Plywood Beams they are used as Plywood supports. Use a minimum of two supports per pair of beams. Use more if required by your load condition.

NOTE: Colors shown are as close to actual finishes as the printing process allows. Do not make your final color selection based on the color shade shown on this page. Penco Color Charts are available for a more accurate color match. Exposure to high humidity, chlorine salts, abrasive cleaners, germicidal cleaners and acids can damage the finish and will void the guarantee. For outdoor applications or other harsh environmental conditions, contact your Penco Representative. 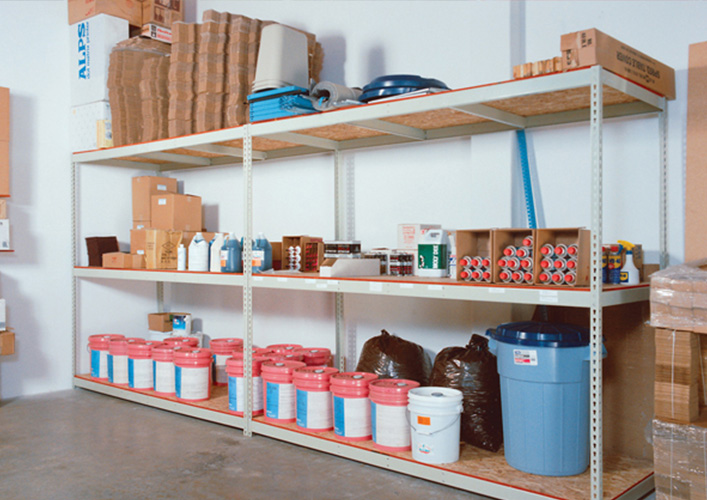 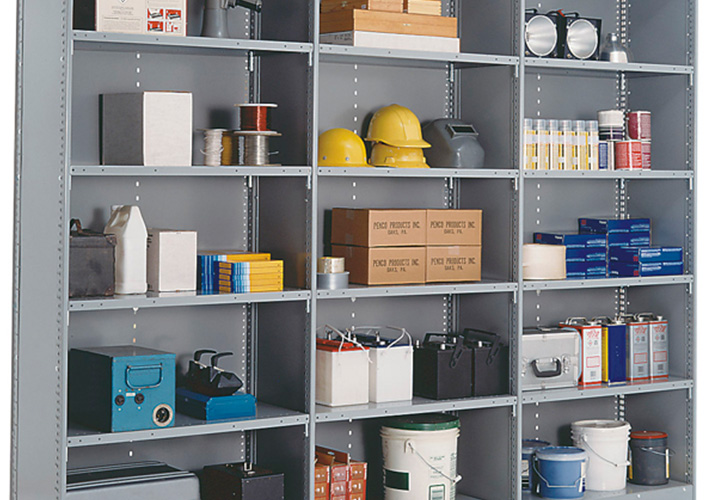 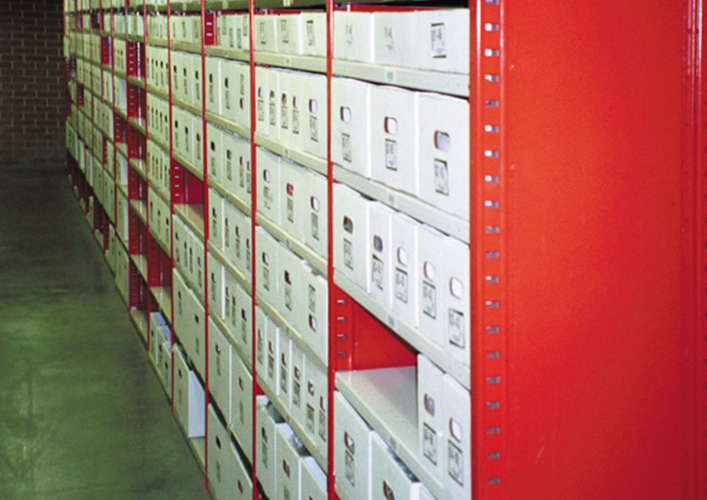 Our configurator allows you to find a Penco product to meet your specific needs.